skip to main | skip to sidebar

As the snow starts melting and first water rises in the rivers, extreme kayak races also started this year. First of them took place in famous Brandenberger Ache in Tyrolian Alps on 9. - 10. April. 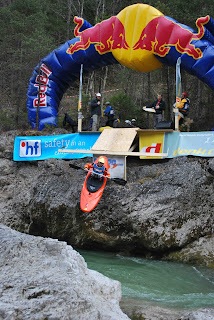 Starting from the ramp, qualification
Our group included Matěj Sottner, Bety Brabcová and me managed to get through Pragues traffic jam easily and arrived to Kramsach at about 11 pm. Next morning we sign up and got info that water level is really low, so we were not able to paddle the qualification section before the actual race. Nevertheless we walked for like an hour around the course, because some rapids were pretty tricky and rocky, but it was just WW 2-3 I would say.

At around 12 the qualification has begun. It was quite fun course, because there was a start ramp which was like 5 metres higher than water surface. Right after landing you have to hit close line through some rocks, lots of small accident took place there. 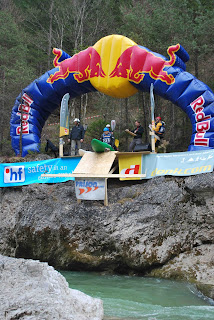 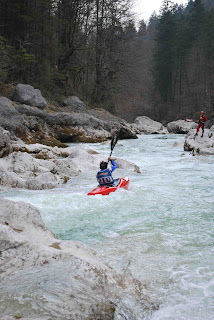 Anyway, everything ended up good and czech team made it through the finals, which was supposed to be next day in Kaiserklamm gorge. Best ride had Honza "Zajíc" Lásko, who took 2.place right after him was Viktor Legat. Matěj S. and me ended up on 19. and 20.position.
After great qualifying race we hit party and dinner in Kramsach camp where main tent was built. Party ended up like around 2 am and we kind of crashed head organizer Gery who will definitely remember Havana Rum and Coke together. But It also left some feelings on us, so Matěj had to let drive Bety next morning.


Final day of Kaiserklamm was just great. Still not freezing weather and amazing course with lot of spectators guaranteed awesome day on the river. Finals were not hold in time trial system but it more much interesting kayak cross system. So 4 kayakers stated from ramp and first to made it to next head. Me and Matěj S. paddled together in the first one and managed to beat other by a lot. But next head was deathly for Matěj S., ending third. I managed to beat second kayaker in my head before last drop and luckily made it to guaterfinal, but that head was the last for me. I flipped in the middle part and didn't find any energy left to get to second position. 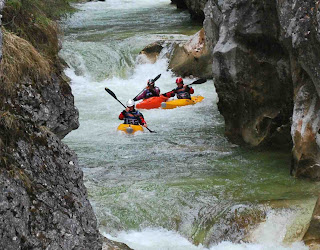 Girls fighting for the win 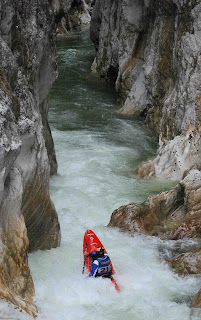 Honza in the end of last big rapid 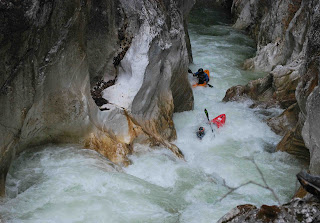 There were quite a lot to watch 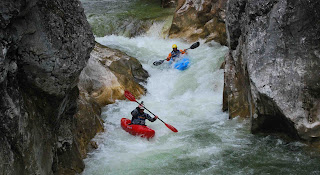 Me paddling for good position 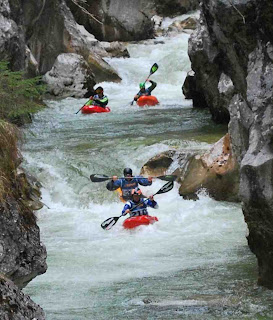 Most interesting part of gorge

Instead of us, Honza and Viktor made it all the way to final. It seemed great for them, because their start was the fastest. But in first big rapid Viktor flipped and fell in 4.position. Zajíc leaded the group till last rapid, where he accidentally flipped and lost his lead. Because of lack of speed current pushed him far right and big hole send him to the rocks on the right side. Right away Jacobus Stenglein passed him upside down and Italian guy Thomas Waldner landed on his head with his boat. So all of them rolled up together in lagoon. Viktor made this rapids seemed easy passing exhausted Honza, but he didn't find any more energy to beat other two paddlers. Final results were 1. Jacubus 2. Thomas and 3. Viktor. 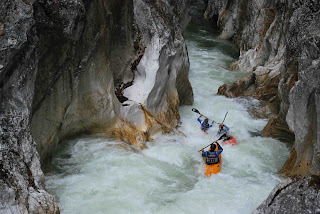 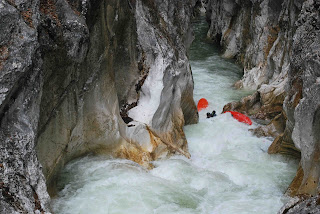 Big accident in mens final. Honza is pushed to the right edge. 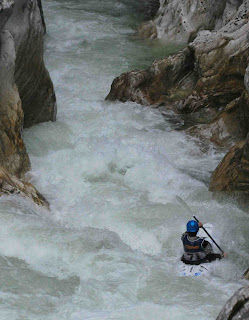 Bety is finishing for 4th position in women race
This superb day finished on camp site with another party, meal and "flower ceremony". Thanks to all who organized this event and see you next year.
Posted by Matěj Holub at 9:46 AM